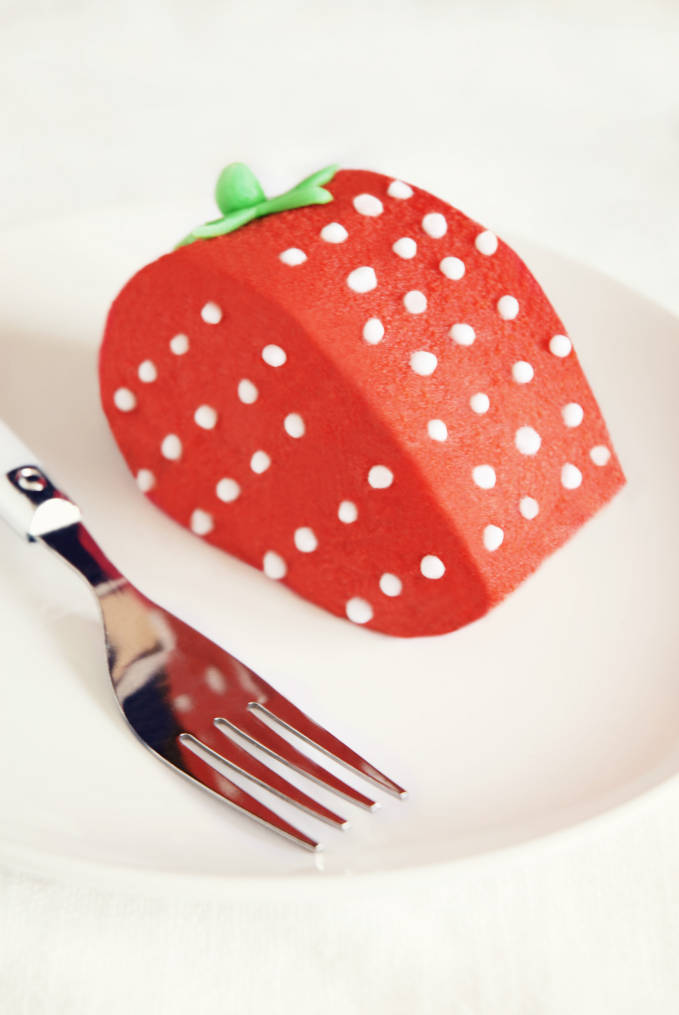 While Ladurée does have a cookbook full of recipes available for purchase, La Fraise, a seasonal pastry, is not in it. Even worse, absolutely no information about the pastry is available on their website—not even a list of components like they have for everything else that they sell. I emailed them twice about the omission, partly hoping I guess that they would not only post a photo of the pastry but also a detailed recipe on their website. Naturally, Ladurée did not reply to the crazy Canadian food blogger who naively asked for free proprietary information. Still, it was worth a shot. Two, apparently.

Without any information other than what I had gleaned from the woman behind the counter, I was forced to work with a haphazard list of components and the vague recollection that I had of the flavours and textures.

For recipes, I modified base formulas from Antonio Bachour’s Bachour cookbook. While the book has lots of great multi-element combinations (e.g. coffee, hazelnut, and caramel entremet cake and key lime and raspberry tarts), I love it because it contains recipes for so many different individual components. I have been mixing and matching components from the book to create other desserts a lot lately, like for salted caramel and milk chocolate tarts. Bachour’s recipes are stellar, and unfortunately I’m not being paid to say that. Inside of my La Fraise, all of the components were scrumptious.

Unfortunately, however, my homemade version of La Fraise does not look nearly as nice as Ladurée’s. If you search for a photo of La Fraise online, sorting through the photos of actual strawberries that have crawled into the search results, you’ll find that my rendition looks like an absolute mess in comparison to Ladurée’s. Their strawberry stem is elegantly curled, the edges of their cake are crisper, and their royal icing seeds are meticulously arranged in near-perfect rows. Meanwhile, my stem is akin to a blob, the edges of my cake are too curvy, and the seeds are just too big. That’s just the beginning of my list of failures with this cake though.

My problem was that I fell into the trap of thinking that all patisseries and pastry chefs have a common understanding of, and thus similar recipes for, relatively uncommon pastry elements. They don’t.

I decided to work from Bachour’s interpretation of crème mousseline. He didn’t have a recipe for a strawberry version, but there was a recipe for a passion fruit variety for one of his cakes. I simply subbed the passion fruit purée for strawberry purée and reduced the amount of sugar, expecting decent results. My results were anything but. 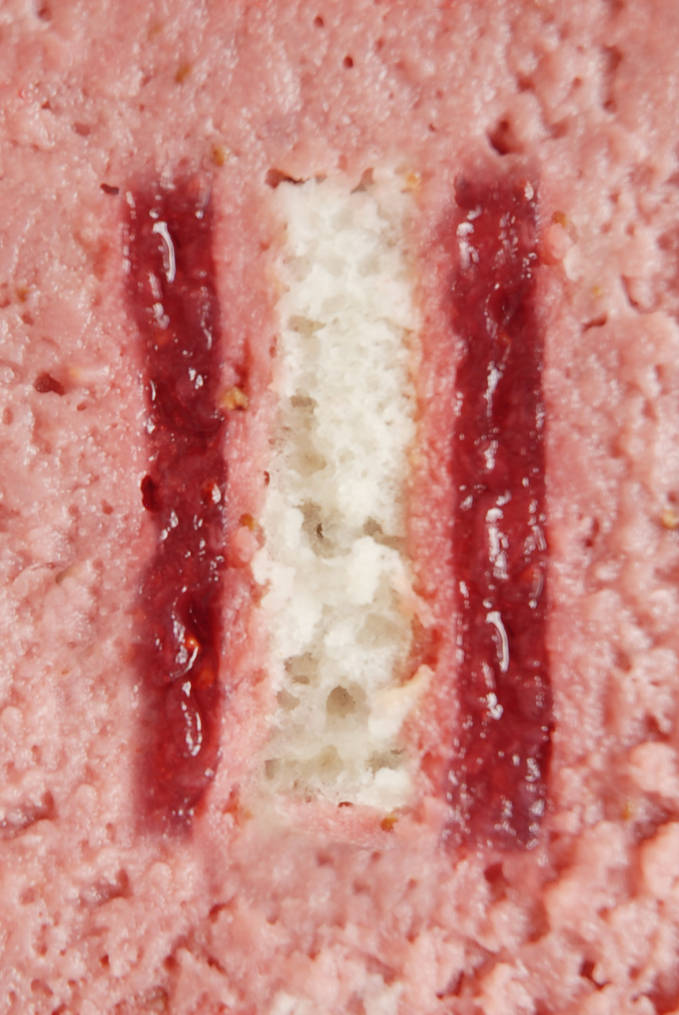 Although the texture my version had was very similar to Ladurée’s (it’s the light pink cream in the above photo), I added too much strawberry purée. I can tell because, when comparing the interior of my pastry to Ladurée’s, my mousseline is far redder. Added strawberry flavour isn’t, by any means, a massive issue. Too much water, as a result of adding too much purée however, is.

After I rolled La Fraise in toasted red dacquoise crumbs (much like I did for the Devil’s Food Cake I made a couple of months ago), the crème mousseline released water into the crumbs. The entire pastry felt wet; nothing like Ladurée’s.

This was a huge problem because it meant that (a) the pastry was difficult to pick up, (b) the edges were not as crisp as I would’ve liked them, (c) the royal icing was hard to pipe on because it kept falling off, and (d) the sugar in the gum paste dissolved and released a liquid down the back of the pastry after being on there for a little while.

You may notice, however, that not a lot of what I just described is visible in the photograph that I posted. Well, my photograph is from a very strategic angle: the back of the pastry is covered in a green liquid from the sugar dissolving in the gum paste and the other side of it is lacking “seeds” because I did not have the patience necessary to continually pipe on royal icing that slid off mere moments later. What you’re seeing is the sole semi-decent angle from the best of six pastries that the recipe made.

Ladurée doesn’t just avoid the issue of too much moisture by using less purée in their crème mousseline. Their pastry cooks also spread a thin layer of white cream over the mousseline before covering it in the red dacquoise cake. That layer of cream, which I skipped because I was unable to identify it, must serve as a water-proof barrier that prevents the dacquoise from getting wet. In hindsight, I shouldn’t have skipped it.

Appearance wise, my version is plain awful in comparison to Ladurée’s. Even without the issue of wet dacquoise crumbs, my piped seeds are sloppy and the strawberry stem I created doesn’t look nearly as nice (partly because I let it dry out on the cake, in a moist environment). The overall shape is a problem too. I used homemade pastry rings fashioned out of flimsy plastic. Ladurée, on the other hand, uses nice, metallic pastry rings. You can’t get great results with subpar equipment.

While my version of La Fraise isn’t jaw-droppingly beautiful like Ladurée’s, I prefer the stronger strawberry flavour in mine due to the addition of more strawberry purée. For next time, I’ll skip the red dacquoise crumbs, royal icing, gum paste stem, and cartoony strawberry shape. Instead, I’ll assemble the coconut sponge, strawberry compote, and strawberry mousseline in a mousse ring and then glaze with a simple white or dark chocolate mirror glaze. Much simpler, much nicer. I suggest you skip the gimicky appearance and do the same.

Print
La Fraise
A homemade version of Paris’s Ladurée Patisserie’s La Fraise entremet cake, bursting with strawberry flavour! Be sure to read the notes at the end before attempting this recipe!
Ingredients
For the coconut sponge:
For the strawberry compote:
For the strawberry crème mousseline:
For the red dacquoise crumbs:
To decorate:
Method
Prepare the coconut sponge:
Prepare the strawberry compote:
Prepare the strawberry crème mousseline:
Assemble the pastry rings (only if you don’t have metal paisley pastry rings):
Assemble the pastries:
Prepare the red dacquoise crumbs:
Assemble the pastries:
Notes
The recipe above details exactly how I made these. However, as I wrote in the post, they didn't turn out so well appearance-wise. Nevertheless, they tasted great. Thus, I suggest you skip the crumbs, the purely decorative elements (stem and seeds), and the shape. They take a long time to make and they doesn't come out very nicely because of the amount of moisture in the mousseline recipe. Apparently, the white cream that I wrote about in the post but didn't use is quite important. There are other differences between this version and the bakery's. For instance, it's possible that Ladurée doesn't use toasted crumbs but a thin layer of cake instead. It's hard to tell. Also, the stem probably needs to dry separately from the rest of the cake to harden properly. I'm not particularly sure because I haven't worked with gum paste before. I have a feeling though that it never dried hard on my version because I set it immediately onto the very moist cake.

Instead of pursuing the strawberry shape and design (at least with this recipe), I suggest layering the coconut sponge, strawberry compote, and the mousseline in a regular round or square pastry ring, freezing completely, and then coating with a chocolate mirror glaze (the recipe from the Ambroisie cake I made earlier works nicely). You won't get the strawberry shape, but it will taste just as good with far fewer problems. I'm unable to nail down Ladurée's recipe just yet...
3.2.1311