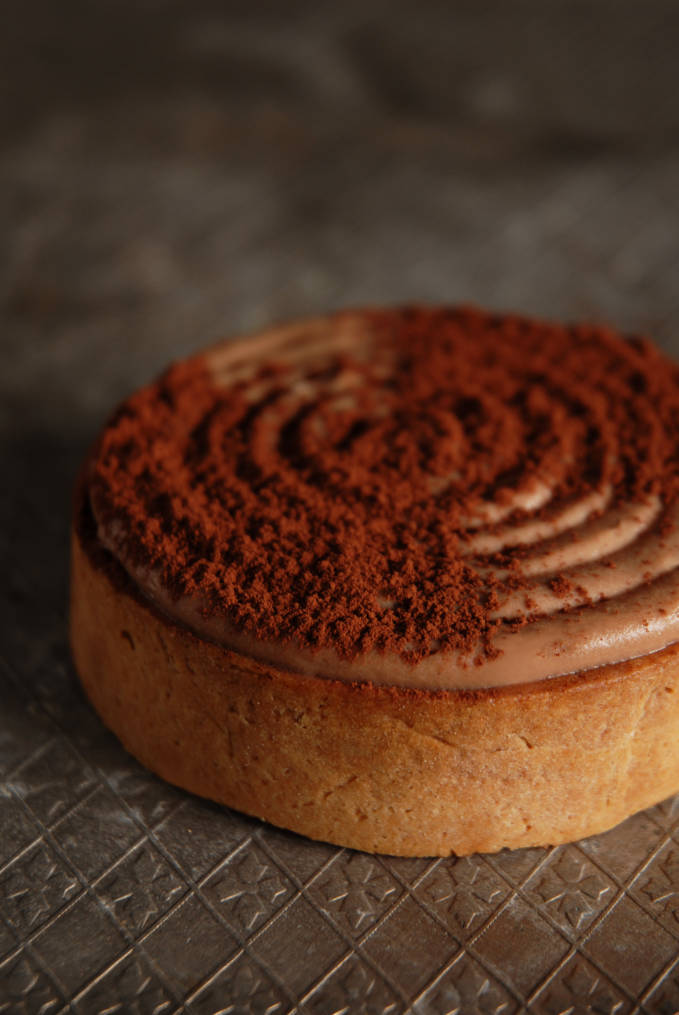 Previously, I’ve written about Hidemi Sugino, a Japanese pastry chef who in 1991 won the World Pastry Cup with his Ambroisie, an entremet cake made with pistachio, raspberry, and chocolate. By no means, however, are his stores the only place in Tokyo to savour unique flavour combinations—a visit to Japan is incomplete without a bite of one of Sadaharu Aoki’s masterpieces.

Aoki is known for combining Japanese flavours, like yuzu, matcha, and black sesame, with traditional French pastries the likes of millefeuille, éclairs, and macarons. And he does a damn good job of it. His stores, in Japan and Paris, are some of the most visited.

Unfortunately, unlike Hermé or Ladurée, Aoki does not publish any of his recipes. That’s a big problem; his pastries (especially his salted caramel tarts and sesame éclairs) are often some of the highest rated ones on Paris to-eat lists.

I wanted to try them. Alas, flying over to Paris or Tokyo was not an option.

Recreating a pastry that I’ve never tasted before was certainly a challenge. I worked off of detailed descriptions and photographs that I had found online of these “perfect” salted caramel tarts.

As soon as I understood what the components are, I got to work and made ten.

(1) The tart shells were easy. I used a simple recipe from Antonio Bachour’s book, the same one that I used for the key lime and raspberry tarts I made a few weeks ago.

(2) For the salted vanilla bean caramel, I used Stella’s recipe for caramel sauce. I had to make a couple of modifications though. I drastically cut down the amount of cream in the recipe (I used about 15% of the recommended amount) so that the caramel would have a more solid texture (I was not going for pourable, like she was).

I also increased the amount of salt and switched to fleur de sel, as the description for Aoki’s tart in his stores specifically states that he uses fleur de sel. That being said, I’m sure that using standard kosher salt would work too. Salt is great in caramel because it both cuts down the sweetness and elevates other flavours.

(3) When figuring out how to make the milk chocolate mousse, I found a recipe online that claimed to be Aoki’s. I was not convinced, however, because it only called for milk chocolate and whipping cream. From what I’ve read online about the tart, the mousse lasts for quite a while. From the recipe, it didn’t seem like it would.

I decided to make a milk chocolate cremeux instead, also from Antonio Bachour’s book. Bachour’s recipe contains gelatin, which helps the spiral keep its shape for a long time.

Speaking of the spiral, it was a pain. Piping spirals is incredibly difficult.

I had to use a robot.

When I first saw the spiral top on Aoki’s tart, I knew that using a robot was the only way I could replicate it. My piping skills aren’t very good.

Luckily, in 2005, my parents bought me a LEGO NXT Robotics kit. I still had it.

I fashioned together a simple robot, in about fifteen minutes, that spun in a circle. To make the spirals, I simply placed the tarts on the robot and held the pastry bag above them. I pressed down on the cremeux, and perfect spirals formed before my eyes.

Well, actually, it took close to thirty tries (and lots of rants on Twitter) before I was able to get one right… (You can see a picture here.)

But, once I got it, I made about half of the tarts with spirals. For the rest, I got too annoyed. I just dolloped some of the cremeux on. I probably won’t bother with the spiral in the future.

(4) I had no idea what the tan powder Aoki sprinkled on his tarts was. No clue. It might be ground up tart shells. In any case, I didn’t want to take the risk and decided to leave the powder out.

(5) Sprinkling the cocoa powder onto the cremeux was probably the easiest step of this recipe. I used a small sieve and blocked sections of the tart off with parchment paper while dusting, and it ended up wonderfully.

These tarts were a bit of a project, especially the cremeux spiral which drove me nuts. That being said, the end result was unbelievable. The milk chocolate complemented the caramel so, so well.

The crunch of the shell, the creaminess of the caramel, the smoothness of the cremeux, and the bitter notes of the Dutch-processed cocoa powder are flawless together.