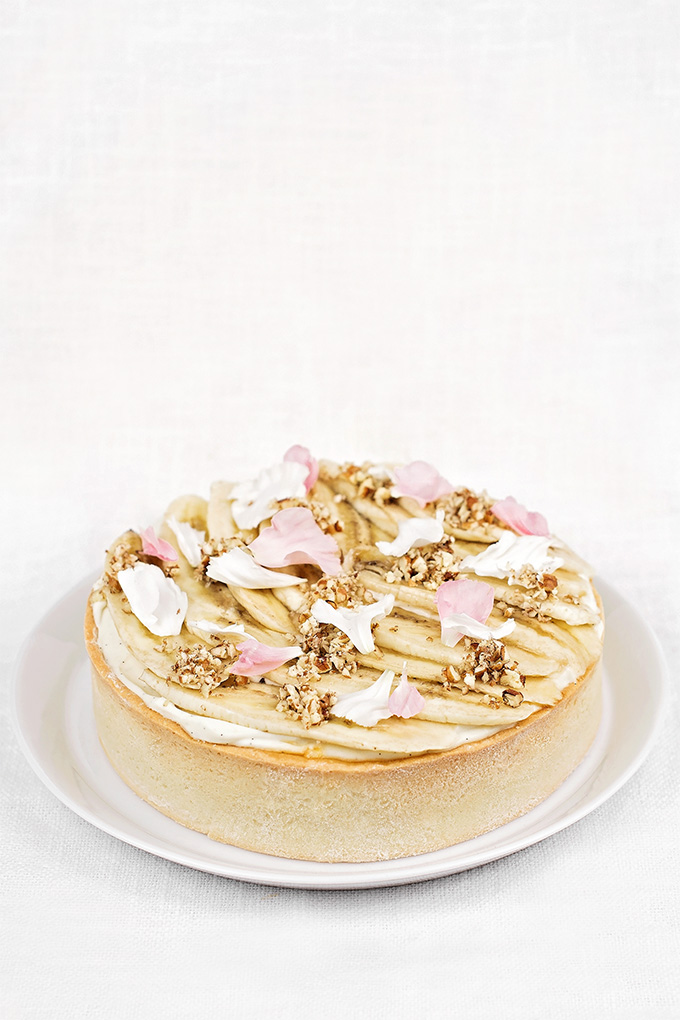 Quickly, however, I gave up on the idea. I realized there are some elements of banana cream pie–even Coco’s–that could be improved. I didn’t see the point of copying their (admittedly amazing) banana cream pie if I could figure out how to make a better version.

I concluded that two (linked) issues arise with most banana cream pies. First, many recipes skip out on the “crunch factor”. I’m of the opinion that a good dessert needs to balance creamy and crunchy sensations. Most banana cream pies end up being all cream. Without textural contrast, they fall flat. Switching from a traditional pie crust to a tart shell added a crunch factor. Big plus.

Second, the cream filling often seeps into the pie crust (or, sometimes, tart crust) and makes it soggy. This destroys textural contrast! What a shame. My solution, borrowed from the strawberry, almond, and rose tart I made in 2014 (a recipe I highly recommend), is coating the inside of the tart shell with white chocolate before filling it. The white chocolate separates the cream filling from the tart crust and maintains the creamy-crunchy contrast even after a couple of nights in the fridge. Tartine Bakery does something similar by coating their pie crust with dark chocolate (you can see that in their first cookbook, Tartine). While this is a directionally accurate solution, I find the dark chocolate in their version a bit overwhelming given the delicate flavour bananas have.

This is a great dessert that isn’t difficult to make. If you’d like to make it even simpler, skip the fancy tart shell. Simply bake the tart dough flat, crumble, and serve as a parfait. If you’d like to make it more complicated, sprinkle sugar on some of the bananas you intend to top the tart with and caramelize with a blowtorch or the broiler of your oven. Just note that caramelized bananas, which end up looking a bit soggy due to heat exposure, do not make for as pretty of a topping as fresh ones.

One more note. Make sure you slice the bananas thinly or else they won’t meld well with the cream filling.