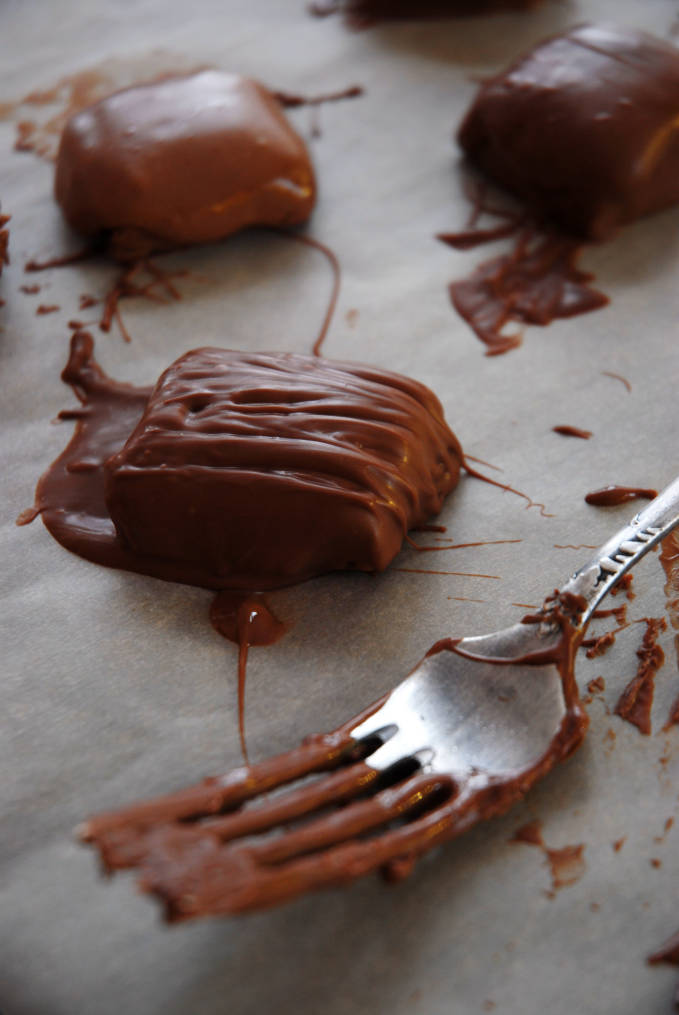 When your thermometer isn’t accurate, you’re positive that everything is going to be fine and then it isn’t. You have hope, and then that hope is crushed. First candy, then your dreams.

Maybe not your dreams. Unless your dream is making homemade Mars bars.

There’s a lot of recipes around for homemade chocolate bars, but none really for homemade Mars bars. I’m not sure why. There’s nothing threatening about Mars bars. They even removed the sharp almonds (ooo scary) from the Canadian recipe a few years ago. The edges of the chocolate bars are curved now, so even if you get hit with one in the eye it won’t hurt that much. Mars bars shouldn’t be scary. Mars bars should be delicious.

I made Mars bars in the shape of squares because squares are cool. Yeah, I’m a rebel.

I’m not going to lie to you and tell you that they tasted good. They didn’t. They were truly awful (the first time around).

All because I had a poorly calibrated thermometer. The chocolate nougat came out well, but I overcooked my caramel. I dropped my thermometer after I made the nougat and I think that doing so might have damaged it. Dropping it probably broke it. Probably.

Instead of the soft caramel that’s in the Mars bar, mine was hard. Not only was the caramel hard, it was in that specific range of hard that would drive any candy maker mad. The caramel was too hard to chew but not hard enough to suck on.

If it was just a bit harder, I could have scraped off the chocolate nougat (which was almost exactly like the Mars bar version, by the way) and had caramels to eat. It wasn’t though. I ended up with a soft layer of noguat and a hard layer of caramel. These were impossible to eat.

Oh, and then because the caramel was so hard, these were really difficult to cut into squares. The nougat would stick to the knife while the knife would get stuck in the caramel. My knife was covered in gooey (but delicious) chocolate nougat while the blade was stuck half way in the caramel. I considered using a butcher’s knife at one point, and then I realized how crazy I would look taking a butcher’s knife to caramel.

So I put away the butcher’s knife.

Later batches, with a working thermometer, turned out quite well though.

When you dip these in chocolate you can either go for a smooth finish, like the real Mars bars, or you could make some nice designs on top with a fork and some other types of chocolate. I ran a fork through them to make them a bit “homemade”. 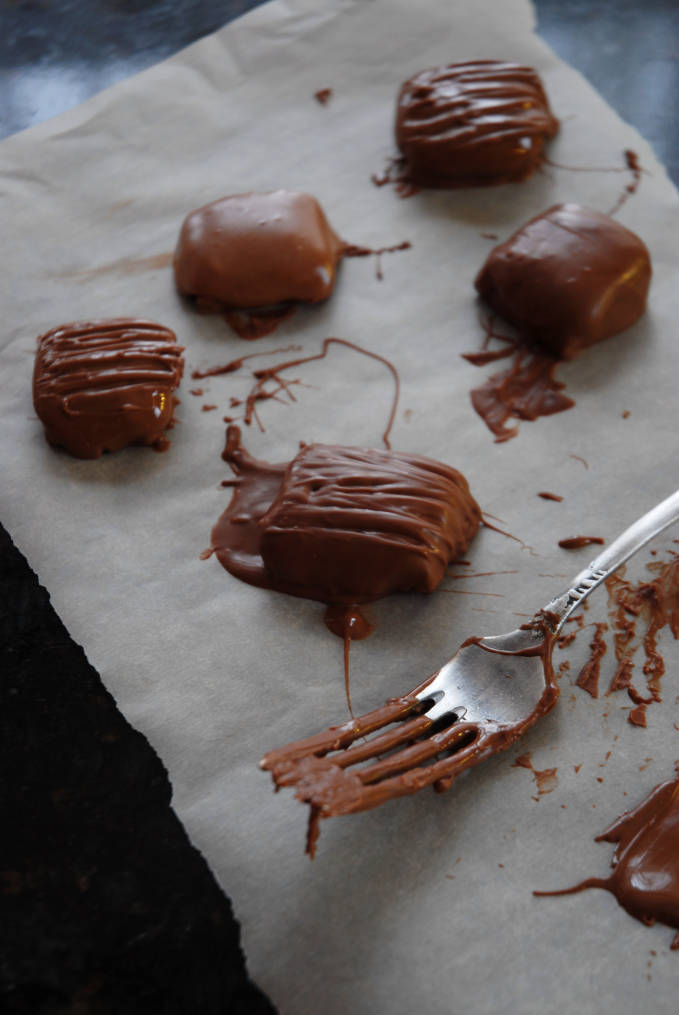 I hope my caramel troubles don’t stop you from making these. There’s nothing wrong with this recipe – just with my thermometer at first.  I (and others who posted in the comments) have made the recipe with a working thermometer after my first batch and it made excellent Mars bars. You just need to make sure that you actually cook the caramel to the correct temperature. My thermometer was off by about eight degrees Celsius the first time around, which is a lot for candy making.

Happy New Years everyone – hope your next year is sweet, with a touch of sea salt since that’s the new baking thing.

Print
Homemade Mars Bars
Finally a recipe for completely homemade Mars bars! Made with chewy caramel and soft, chocolate nougat all dipped in melted milk chocolate.
Ingredients
For the chocolate nougat:
For the caramel:
For the chocolate:
Method
Prepare the nougat:
Prepare the caramel:
Cut the bars:
Dip the bars:
2.2.8
Other nice people like you also read
Raspberry Éclairs
Raspberry and Greek Yogurt Panna Cotta
Mango Doughnuts