Lately, I have become fascinated with Japanese entremets. I have learned how to spell “entremet”, pronounce [on-TRAH-may], and most importantly make an entremet. I also know how to eat an entremet, but that was a skill I honed long before I made this marvellously refreshing recipe by Japanese pastry chef Hidemi Sugino. 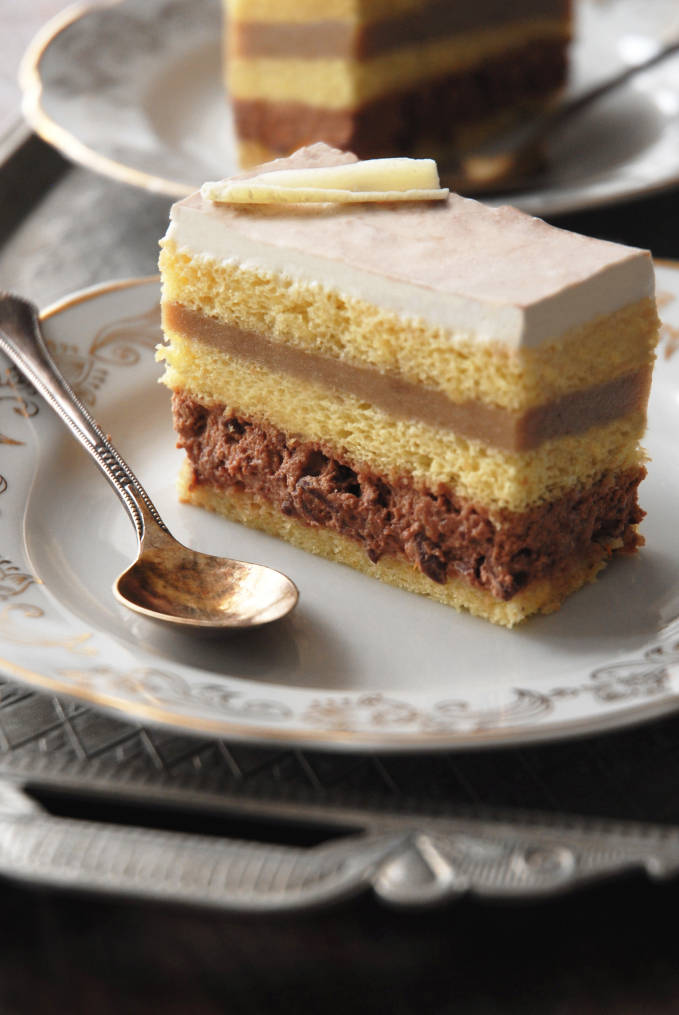 Sugino rightfully has a cult following in Japan (and – ahem – in Toronto). His desserts are incredibly artistic and his flavour combinations are exquisite. Sugino only uses enough sugar in his creations to accentuate his delicate flavour combinations. Even dark chocolate proves to be light in his recipes.Unfortunately for me, his cookbook is in Japanese. I cannot read Japanese (even though I often pretend I am fluent – but that is a story for another time) so I rarely get an opportunity to make any of his recipes. Sigh.

A few days ago, however, I found a wonderful blog called Foodagraphy by Michelle, who lives in Singapore. A few years ago she made this B-Caraibe cake and posted a translated recipe (read: one that I could follow without bugging my only Japanese speaking friend, A, and consulting a Japanese to English dictionary) on her blog. Great find, eh?

The B-Caraibe is actually one of Sugino’s easier entremets, so it is the perfect push (if you for some reason need it) into entremet-baking. Sugino’s recipe uses almond powder/flour in the bisquit joconde cake layers, but I ran out of almonds. I was not particularly keen on blanching, peeling, drying, and grinding the remaining 47g I required. I threw in some ground hazelnuts I had lying around instead. My substitution was “an experiment in the culinary arts”.

Next up was the chocolate chantilly cream (which is really just orange infused chocolate whipped cream). Unfortunately, my chocolate did not melt very well. I folded it into the softly whipped cream anyway, which left tiny chunks of chocolate dotted throughout the cream. At first I was really disappointed: I had failed at melting chocolate in the microwave. The chunks proved, however, to be a nice textural contrast against the otherwise smooth entremet. So feel free to not do a very good job melting your chocolate as well.

My favourite part of the B-Caraibe is definitely the banana sauce, which is not really banana sauce at all. It is more like banana jelly.  Regardless, I loved how the fruity taste of perfectly ripened bananas complemented the fluffy almond-hazelnut joconde and chocolate chantilly.

The slightly sweetened vanilla chantilly was light and creamy, which was expected since it was essentially whipped cream. A thin layer was the perfect way to top off this fabulous, and extremely light, dessert.