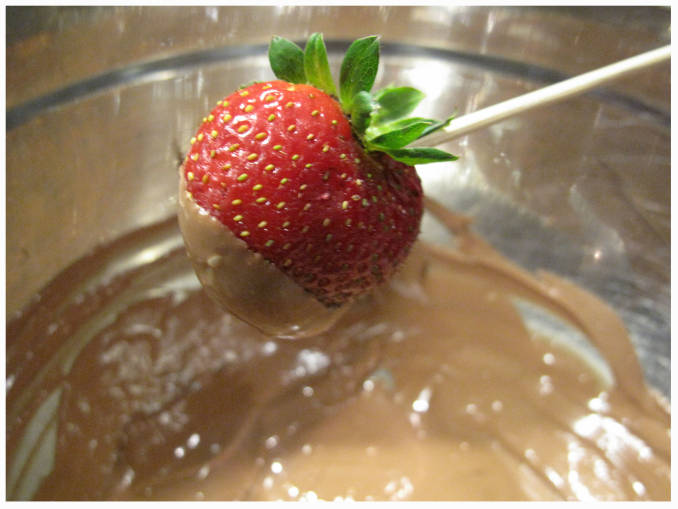 To temper your chocolate chop it up and place 2/3 of it in a bowl. Heat up a pot of water (with less than an inch of water) on the stove and place the bowl on top of it so that the pot holds it up.

Turn the heat to medium-low, stirring your chocolate constantly to make sure it isn’t exposed to too much heat at once. This is called a bain-marie, and its purpose is so that the chocolate isn’t exposed to direct heat, but is rather heated by the steam from the simmering water.

You then want to take the bowl off the pot and stir in the rest of the chopped chocolate. After the chocolate melts let it sit untouched until it reaches 83 degrees Fahrenheit, this should take about a minute. Why do this step? When you melted the chocolate the fat molecules got mixed up in the chocolate and were no longer in rows, but when you add in the rest of the chocolate it helps the fat molecules form chains again. Then, put the bowl onto the pot for ten seconds, take it off and stir. Repeat this until the chocolate reaches 87 degrees Fahrenheit (about a minute), and then you finished tempering your chocolate! If you have thermometers use it instead of relying on the times because you’ll get a better result. If your chocolate hardens you can re-temper it to use it again.

One thought on “Tutorial: Tempering Chocolate”