For a while, whenever anyone asked me what I blogged about, I would explain that I was a Canadian food blogger who cooked everything with a lot of maple syrup. It was supposed to be a joke (a bad one, but still). 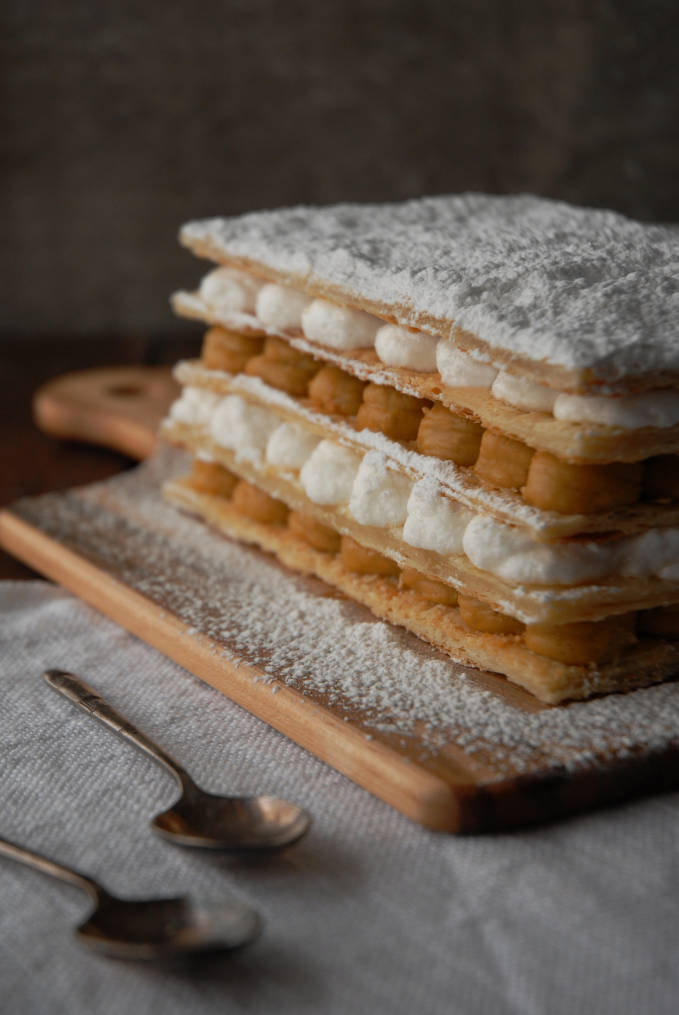 Some people thought I was serious though and became confused when they saw that not all of my recipes had maple syrup in them. I ended up taking down any maple syrup references a few weeks ago.

Pretty much right after, I felt the need to cook with maple syrup. Funny how that happens.

Browsing through recipes, I found Martin Picard. Picard is a famous Montreal chef who wrote an entire book on maple syrup. Sugar Shack Au Pied de Cochon has recipes for much more than just the standard maple taffy and maple candy, however. If you’ve never made maple taffy before, the process involves pouring molten sugar (in the form of maple syrup) onto densely packed snow and then spinning it around a wooden stick. I wasn’t really in the mood to go outside and gather snow. I was totally in the mood for this cake though.

His maple mille feuille is dazzling. A million layers of maple pastry cream and whipped cream are sandwiched between layers of delicate, and ever so flaky, puff pastry. I wanted a slice of that cake.

Since I had a lot of time to kill, I decided to whip up my own puff pastry instead of purchasing some from the store, like he recommended.

I’m not sure doing so was a wise idea. The puff pastry came out great, but store bought puff pastry isn’t half bad. I don’t think the effort of folding detrempe (the butter-less part of puff pastry) and beurrage (a block of butter) until you get hundreds of layers of dough is worth it. Why spend so much effort if the results aren’t going to be much better?

That’s what a logical person would say at least. They wouldn’t spend hours folding dough. They would just go to the store and buy some. However, if you have a lot of time to kill like I did, you can make your own puff pastry. Don’t though.

This cake was super yummy. I loved the contrast between the flaky layers and the smooth cream. Give it a shot.

Also, sorry I wasn’t around much last week. I was super busy with school work.