It’s important not only to have recipes but also proper technique in baking. I recently redesigned the website and added a new tutorial section. Every few weeks I’ll be posting a guide to help you master a skill. This time? Chiffon cake! 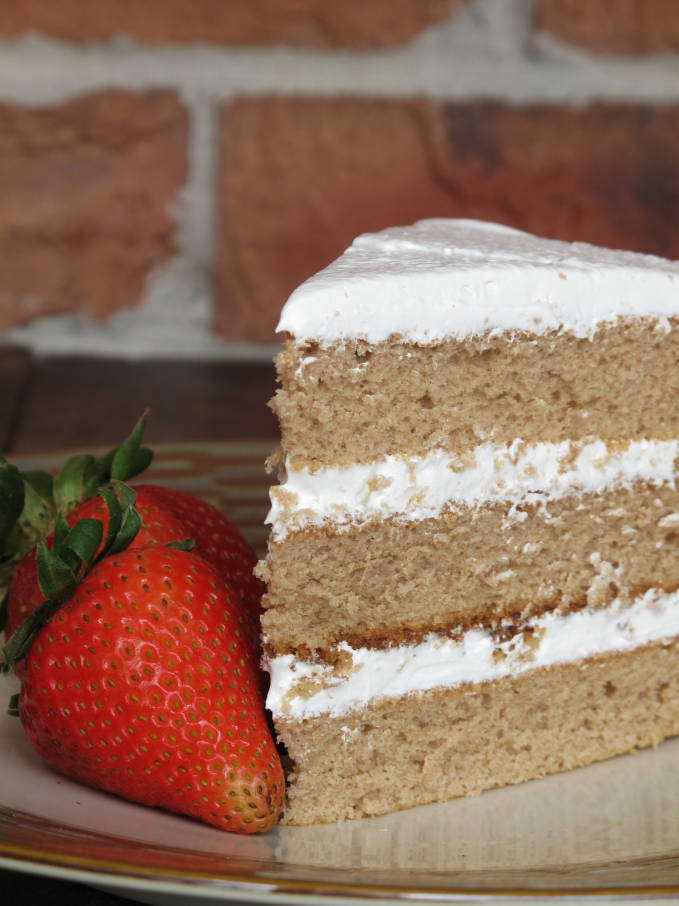 Chiffon [SHE-fon] cake is a delicious, light airy cake made mainly with egg whites. It’s common in a lot of layer cakes in combination with fruit purees or just by itself, with whipped cream and berries. Ever had angel food cake? It’s almost the same!

Improperly made chiffon cakes often have large bubbles in them that just don’t look right. These bubbles make it much harder to make a layer cake since they make the layers uneven. And, if these bubbles pop while baking, they’ll ruin the cake.

Most recipes also result in a cake that “sinks” at the top and has uneven sides.

Adding more flour to the recipe results in a cake that has a nicer appearance but is much drier.

And if you use equal amounts of egg yolks and egg whites, then the cake may be nice and soft but the texture will just be odd.

This guide will help you master the art of chiffon.

To achieve a good chiffon cake it’s really important to control the oven temperature. This is much easier to do with an accurate oven. I suggest buying an oven thermometer to check how precise your oven is and to compensate accordingly. Accurate temperatures are important. They can make or crack (break) a chiffon cake.

Eggs vary a lot in size. Most baking recipes are for large eggs, and using a different size of egg can cause your cake to behave strangely. I sometimes use extra large eggs in recipes but I find that for egg-based cakes, like chiffon cakes, it’s best to use large eggs. The amount of yolk and white in the cake can really affect its texture, so sticking to the recipe is important. Large eggs guarantee you do. I also recommend using fresher, room temperature eggs in the cake since they whip up better. Not only is room temperature important for the egg whites to whip up, but room temperature ingredients must almost always be used in baking because they ensure a better texture and shape. Fresher eggs whip up better as well. On especially humid days, avoid making chiffon cakes or meringues since egg whites do not whip up as well. 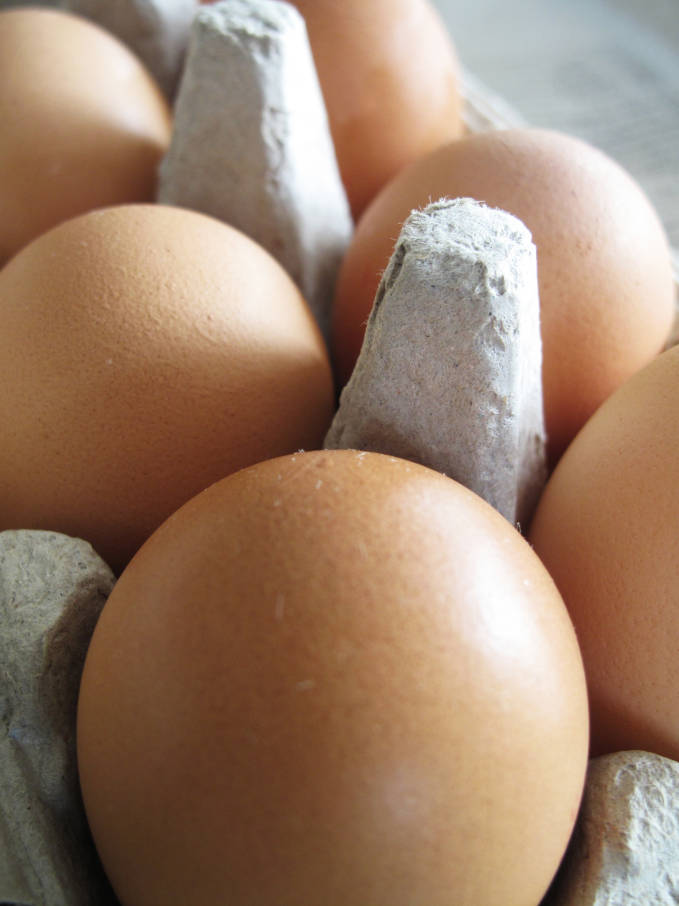 When whisking the whites, make sure that the bowl is clean. Any oil or grease in the bowl will result in egg whites that don’t whip up as well. Just clean the bowl with hot water and soap. Just rinsing with water is not enough. Soap is able to emulsify the grease and take it off the bowl. I recommend adding the sugar and the cream of tartar right at the beginning with the egg whites. It doesn’t really matter when you add them, but if you always add them in the beginning you will achieve more consistent results. Don’t bother adding the sugar slowly while the egg whites are whipping.

Beat on medium speed the entire time. Avoid changing the mixing speed; this will ensure uniformly sized air bubbles in your cake. You want to whip the eggs until “medium” peaks form. When you take the whisk out and the peaks fall over on themselves the peaks are “soft”. When you take out the whisk and the peaks stay upright they are “stiff”. You want something between these two stages, where there is a half curl on the whisk when you take it out. Whipping to medium peaks still allows the egg whites to expand when in the oven, resulting in a light and fluffy cake. Some recipes recommend overbeating the egg whites, but it is not necessary. In fact, the reason some chiffon cakes are so dry is because of overbeaten egg whites (and too long of a baking time). 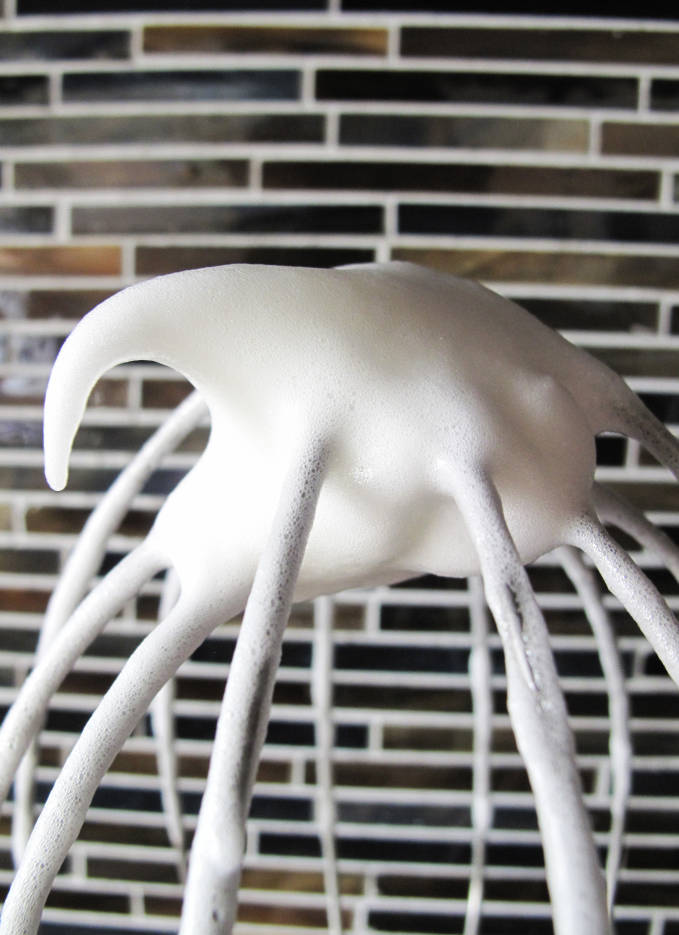 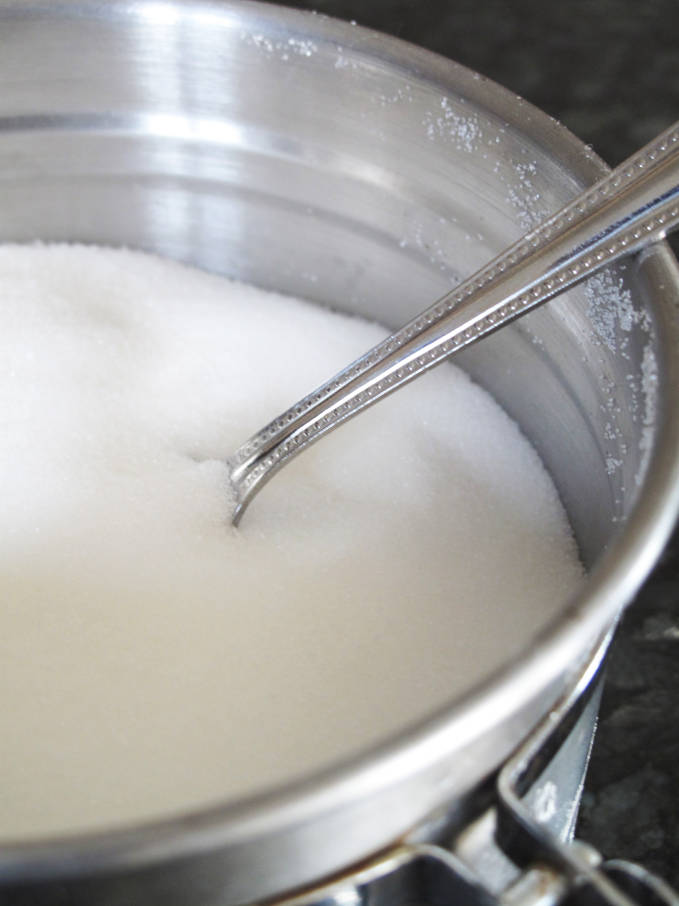 Pretty much any vegetable oil works. Oil is used instead of butter in chiffon cakes to give the cake a light, softer texture. That means don’t use melted butter as a substitution!

Cream of tartar is used to stabilize the egg whites so that they’re easier to whip up. Cream of tartar is potassium bitartrate, which is produced from tartaric acid. The acid reacts with the basic egg whites to help them get fluffy. It also prevents them from being over beaten. Generally, I use about 1/16th of a teaspoon of cream of tartar per egg white in chiffon cake. 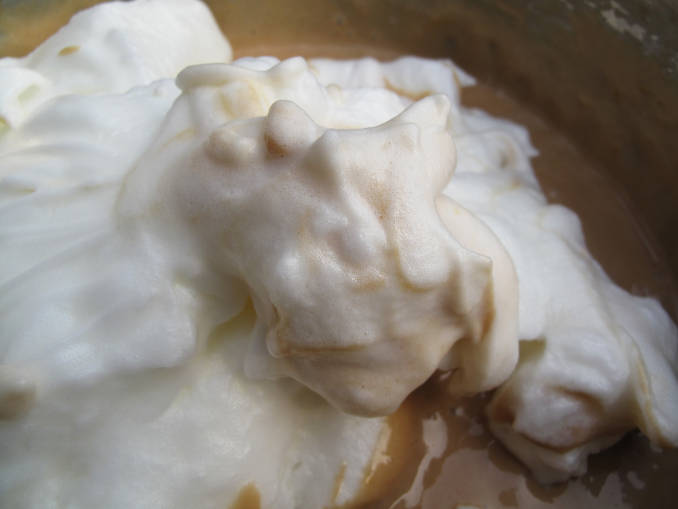 Using a baking pan that’s the correct size is important. Traditionally, chiffon cakes are baked in tube pans because of their unique sides that allow the cakes to rise higher. Pans that are too large cause the batter near the sides of the pan to rise higher than the batter in the middle of the pan. This makes the cake cave in on itself. Properly sizes pans do the exact opposite, resulting in a properly baked cake. Do not grease the pan. Chiffon cakes cling to the sides to rise. If you grease the pan, they will not rise as high.

Before pouring the batter into the pan, take the bowl and hit it against your counter. This will dislodge any air bubbles in the batter and cause them to rise to the top and pop. This ensures that there aren’t any strange bubbles on the cake. Pour the batter into the pan in one place. Try to avoid moving the pan while pouring the batter. This ensures that more bubbles do not form. Avoid hitting the pan against the counter after pouring the batter as this will create air bubbles at the bottom of the cake. To minimize the amount of cracking, smooth the top of the cake batter with an angled spatula. Avoid using anything else as it could create more cracks. If you don’t have an angled spatula, it’s best to avoid this step entirely. 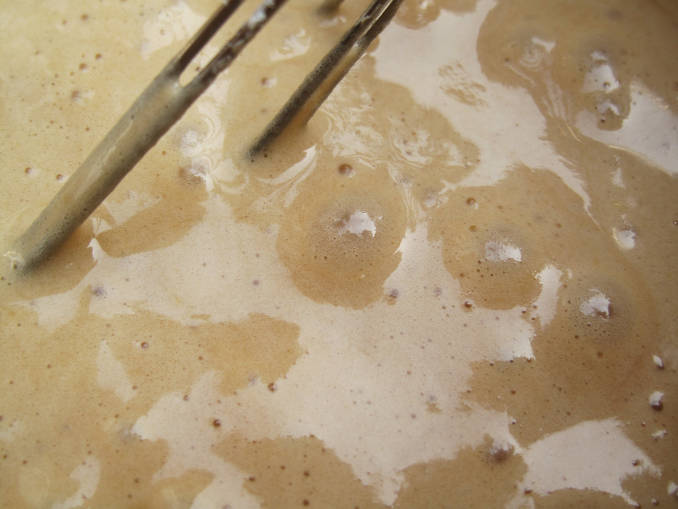 You want to bake the cake at a fairly low temperature, around 325°F and as low in the oven as possible. When the cake begins to crack at the top, either turn the heat off at the top if your oven has that setting, or set a metal pan above the cake so that the top of the cake itself is cooler. Your cake may not crack. It’s alright. Don’t worry about it. Your cake may have a large bubble in it though. Don’t bother poking it with a stick. It won’t help deflate it. Once it’s done baking, it usually goes away.

You want to have more heat from the bottom than the top so that the cake doesn’t become overly brown. The cake is done when it bounces back after being lightly pressed in the center. Some cakes may have crispy edges. This can be avoided by sticking to a low temperature and by making sure not to over bake the cake. Too much sugar can also make the cake crispy on the sides, but it is unlikely. 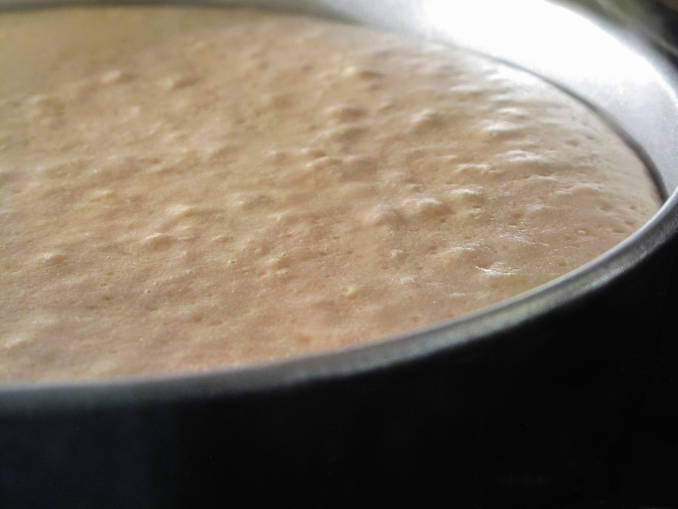 Let the cake cool in the pan before taking it out or it may fall apart; it should cool completely in the pan. Invert the pan onto a cooling rack to prevent condensation from forming on the cake as soon as you take it out of the oven. The cake needs to cool upside down, with air flow underneath it. All chiffon cakes need to cool upside down so that they stretch down instead of collapsing. 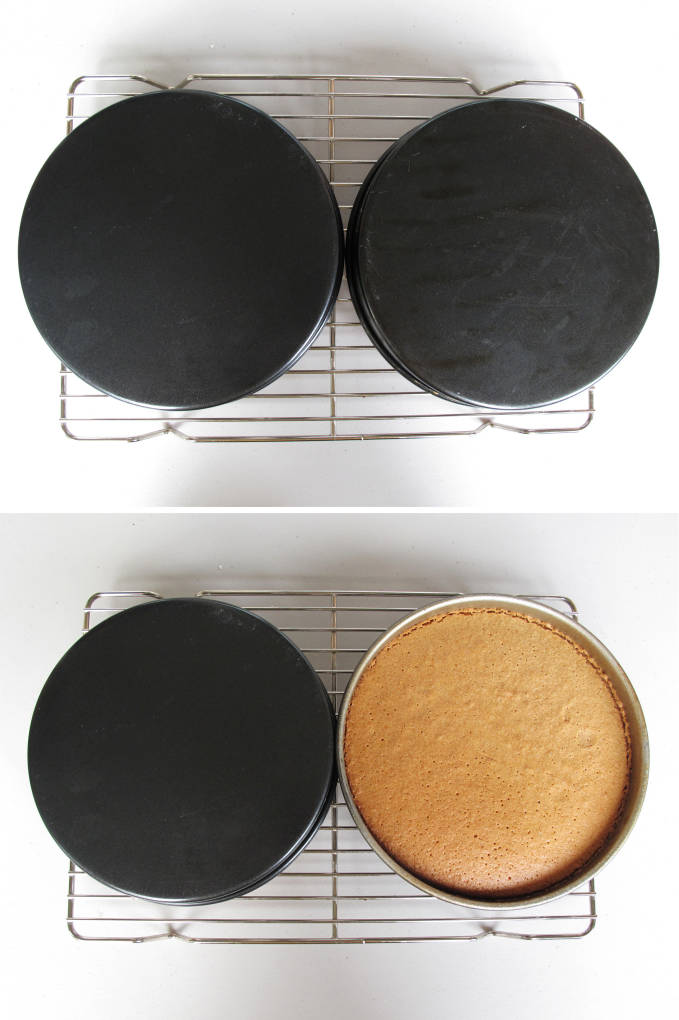 Use a sharp knife or angled spatula to separate the cake from the pan in one fluid movement, pressing the knife as close to the pan as possible. 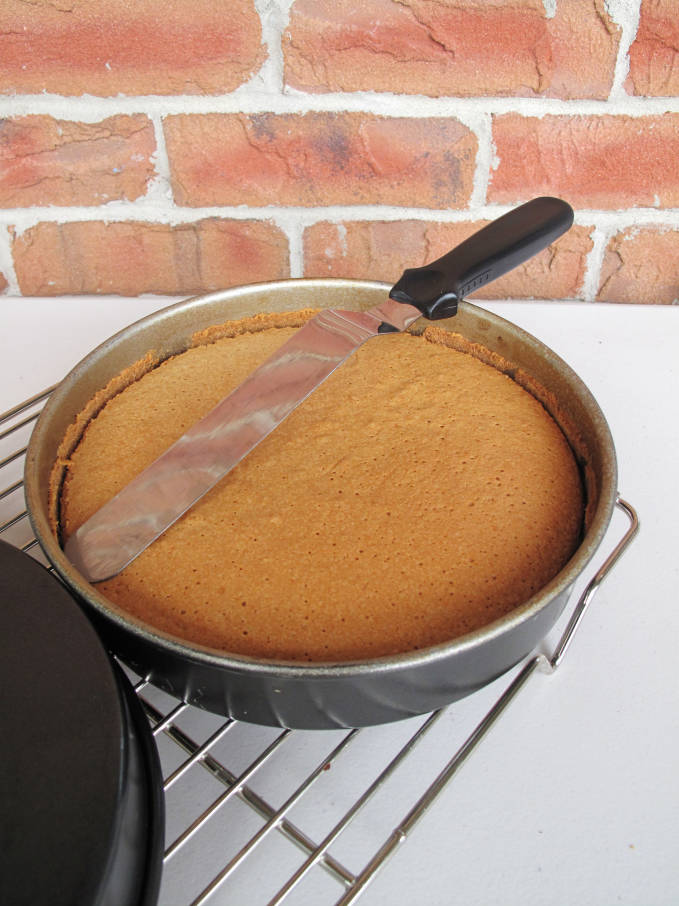 After the cake cools completely, serve as a layer cake with frosting and fruit. Or maybe with a dollop of whipped cream and fresh strawberries – it’s all up to you. 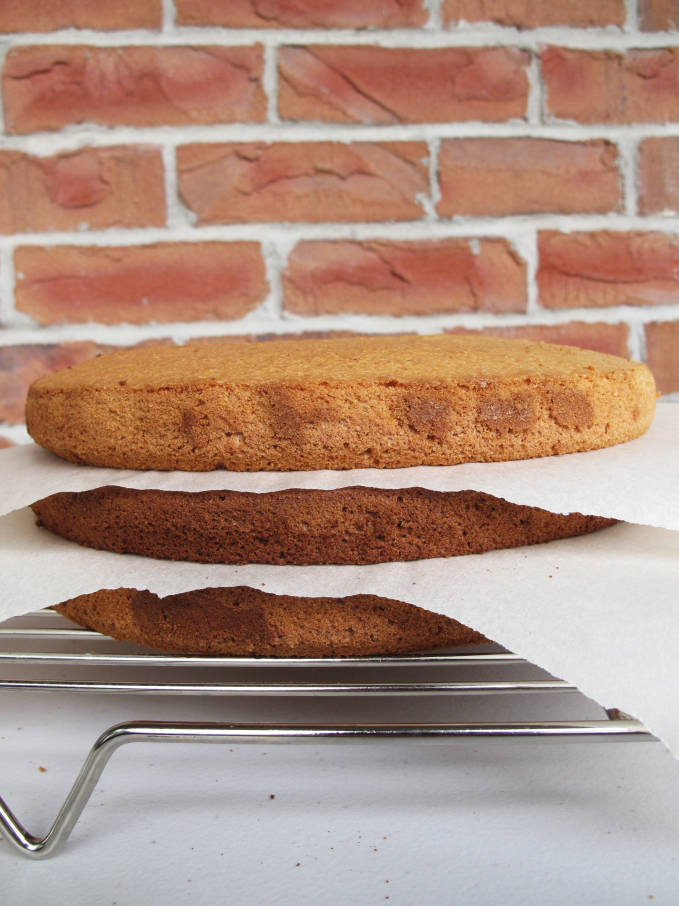 I hope this tutorial will help you in your chiffon cake adventures. If you baked a chiffon cake and you’re still having troubles, please ask in the comments below!

For the recipe for the Earl Grey chiffon cake with maple meringue in this post, click here.