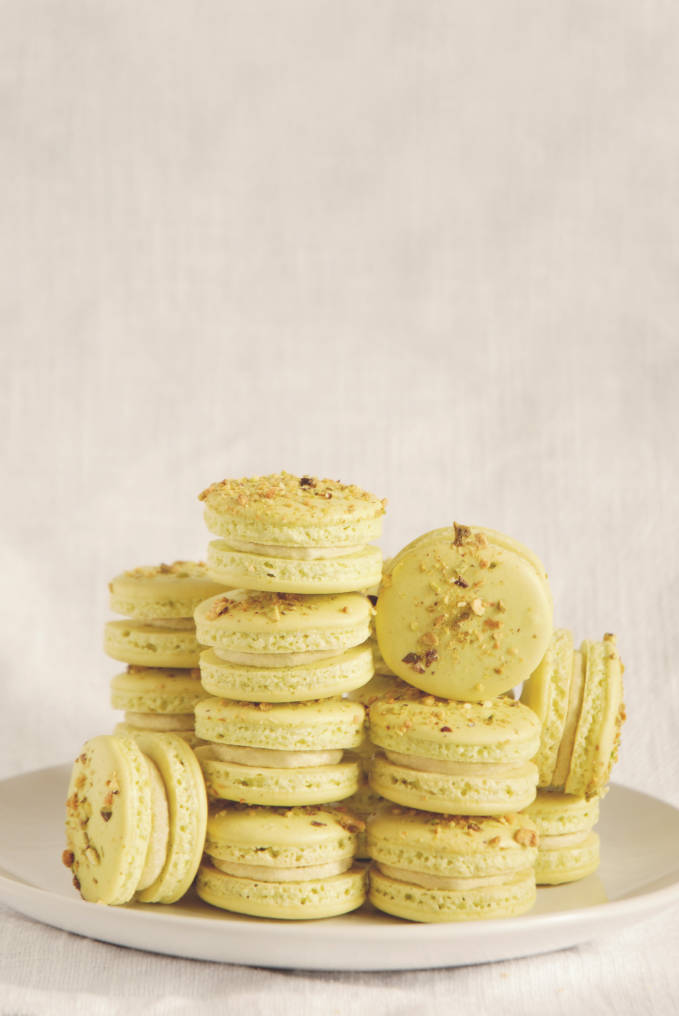 Well, I’ve never actually been gone (from Twitter, at least). I’ve been spending the time working on a new project that I briefly discussed in my last post, and which I’ll talk more about in a future post. With all the time that I’ve been investing in it, there hasn’t been much left for IronWhisk. But now I’ve finished my first year of university! That means I have all summer to share lots of great food with you. First up though, I want to talk about “macaron myths”.

I tried a new recipe for these pistachio macarons. I usually follow the recipe that I wrote about in my French macaron tutorial from a couple of years ago, but since changing ovens I’ve been having troubles with hollow and cracked macarons.

The recipe in my French macaron tutorial is primarily based on Stella’s from Bravetart. On her blog, Stella debunks a lot of macaron “myths” like having to age egg whites and waiting for the macaron shells to dry out before baking them. She says that doing both of these things is not necessary for her. For me, it is. I want to explore the reasons why in this post.

With my old oven, I used Stella’s method and my macarons came out fine. But, after changing ovens, I often ended up with hollow and cracked macarons. I wasn’t sure what was going on. I was using the exact same recipe and technique. The only difference was the oven.

After a couple of annoyingly flawed batches, I decided to switch recipes to see if anything would change. I used one from Antonio Bachour’s new book Bachour (not an affiliate link). The major differences between the new method I used and Stella’s is that the new recipe (a) has lower sugar content by mass, (b) uses aged egg whites, and (c) advises drying out the macaron shells before baking. That recipe made these pistachio macarons. Two of the major changes, B and C, are what Stella has dubbed “macaron myths”. My macarons, these pistachio ones, turned out super well. It appeared that, for some reason, what was a myth in Stella’s kitchen and my old house was no longer a myth. Why?

I think it has to do with heat distribution.

The traditional idea behind drying out macaron shells before baking them is that a dried-out, hard top forces the macaron batter to expand downwards, and create a ruffled bubble of “feet”, instead of upward, cracking the shell. In my new oven, which had poor heat distribution, cracked macarons appeared in specific areas with Stella’s method. These were the hotter parts of the oven.

But wait a second, why did I switch to using a recipe with lower sugar content? Well, with Stella’s recipe, the macaron shells don’t really dry out because of the large amount of sugar in the shells. I made a batch of Stella’s macarons and I had to wait over an hour for the shells to get just a little bit drier. There’s no point of waiting half an hour, like most recipes suggest (and that includes my previously published tutorial), with Stella’s recipe. There won’t be a discernable difference. I used a recipe with less sugar because that’s the only way to have dried out the shells before baking.

I’m still playing around with these ideas, and so I don’t want to make it seem as though this is the definitive answer. These aren’t conclusions, but rather hypotheses. I’d love to get some input on how you make macarons (if you do) to help accept or reject them. Do you age your egg whites? Do you let them dry out before baking? How’s your oven? You can follow me on Twitter as I explore these ideas… Alton Brown does!!