This isn’t exactly a seasonal dessert. Unless you read this about half a year from now. If you’re reading this in the future, I have two things to say. First, congratulations – raspberries are in season and you probably have a few boxes in your fridge to make this right now and therefore you should make this right now. Your future (future) you will thank you.  Second, you’re awesome. 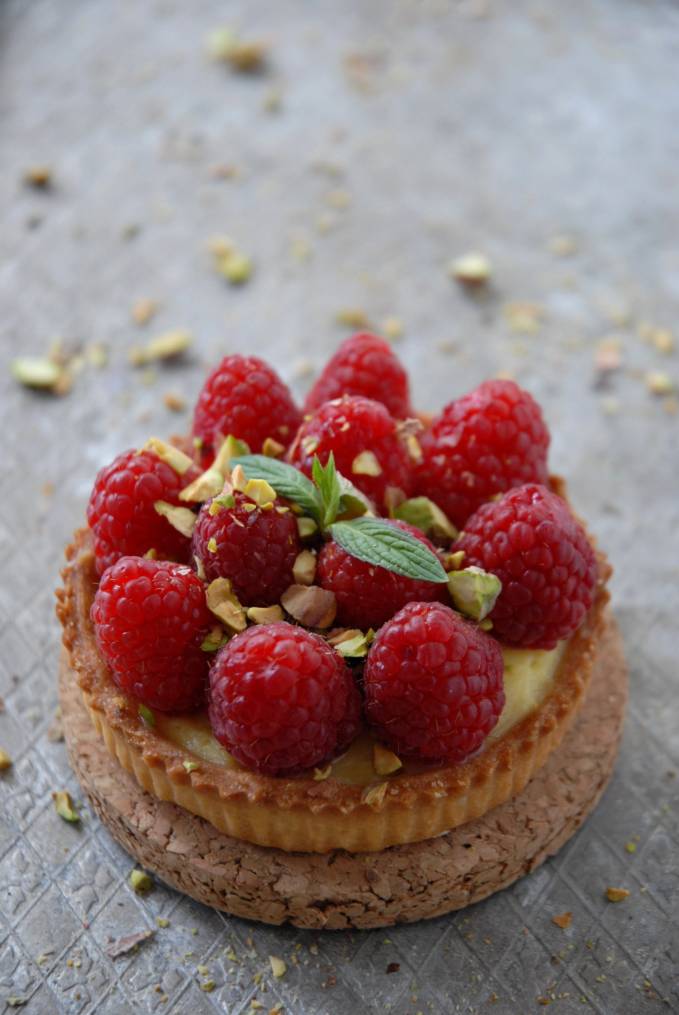 If you’re not from the future well, that sucks. You’re going to get an awesome recipe for a raspberry tart in October though. I would’ve made it earlier but I was too busy with other things. Yeah, I know, it’s a pretty lame excuse. I was just so busy with sugar, schoolwork, and butter though. There’s something about creaming butter and sugar together that’s kind of mesmerizing (and tasty).

When I think about it now, most of the stuff that I make isn’t really in season. I remember last year I made a pumpkin pie in July and then an apple pie in January. Am I the only one who does that? I really should be using seasonal ingredients, being that it’s in the “foodie code”, but these days everything is imported from everywhere and thus raspberries are in season somewhere. Grocery stores have tomatoes all year round – even when there’s half a metre of snow outside (aka “Canadian summer”).

I guess I am using seasonal ingredients then. The produce I use is in season, somewhere, and I’m eating it during a season. Hence it is seasonal. 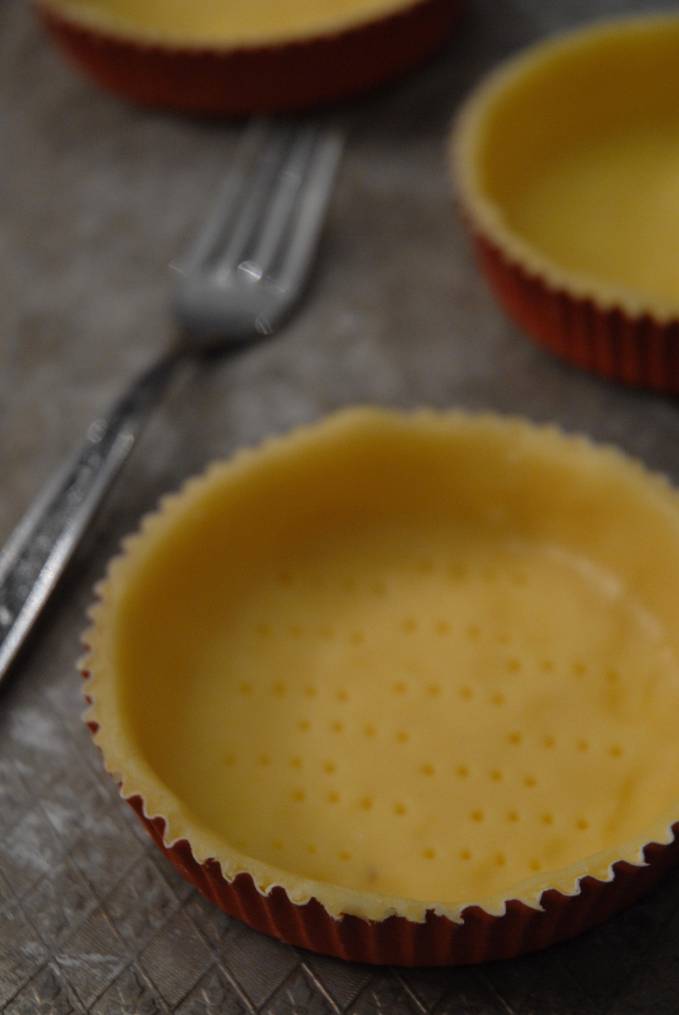 Regardless of season though, these tartelettes (small tarts) were scrumptious. I found and slightly modified a recipe for pâte sucrée (French for sweet shortcrust dough – pronounced [pat sue-KRAY]) that could be made easily in any kitchen with minimal equipment and is pretty much fool proof. I’m really pleased with this dough! It’s an incredibly easy recipe where you don’t even need to use cold butter. The dough doesn’t stick and it doesn’t rip. Not only that, but it tastes amazing! It’s a pretty awesome recipe. To be fair though, I haven’t tried every other pâte sucrée recipe so I can’t say it’s the best one out there but out of all the ones I’ve had this one is by far my favourite. A definite plus is how easy it is to work with.

I was really surprised how easily it all came together, especially since tartelettes can sometimes be so threatening (i.e. really scary sharp corners on the shells). Those corners are almost as scary as getting an egg yolk into your egg whites or only eating one doughnut. I have nightmares about these things. I live in constant fear of things like inhaling too much powdered sugar. 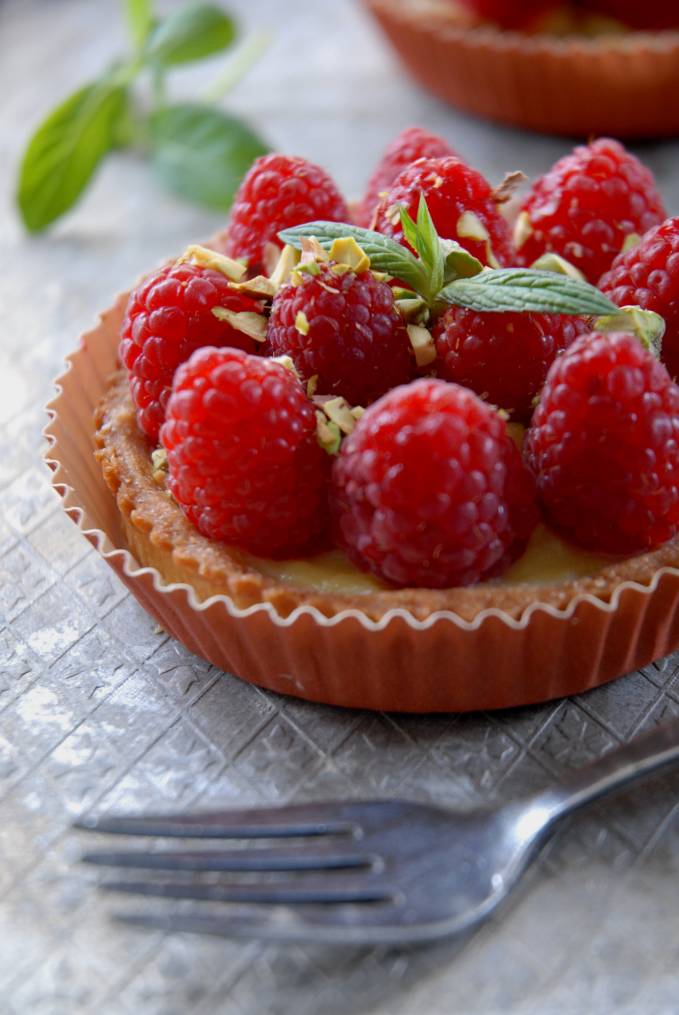 I also don’t like cracked tart shells. They’re such a pain. I have a solution though! The solution involves chocolate. That instantly makes it a better solution. All solutions are better with chocolate. For example, if you don’t have enough chocolate and someone kicks you hard in the leg that is not a good solution to your problem of not having enough chocolate. However, if someone gives you a bar of chocolate and kicks you hard in the leg your problem is solved. You have a new problem, but your original problem was solved.

Perhaps I should consider becoming a mediator…

You can make your tart shells last longer, fix cracks in your pastry, and seal the shells from wet fillings (to prevent the crust from getting soggy) by simply applying a thin layer of melted chocolate to the inside of the shells once they come out of the oven and cool to room temperature. Just melt some chocolate that goes well with the flavours of your tart (so, for example, dark chocolate for a ganache filled tart or white chocolate, in my case, for a raspberry tart) and spread a teaspoon or so in the bottom of your tart. Anywhere you have a crack spread some more chocolate so that when it hardens it will hold the pastry together. Place the tart shells in the fridge so that the chocolate will harden and then you can fill up the tarts like you would normally. This is a much better alternative to the “coat with egg white” option since, well, it’s chocolate. I hope I don’t have to give you another example of why solutions with chocolate are always the better solutions. 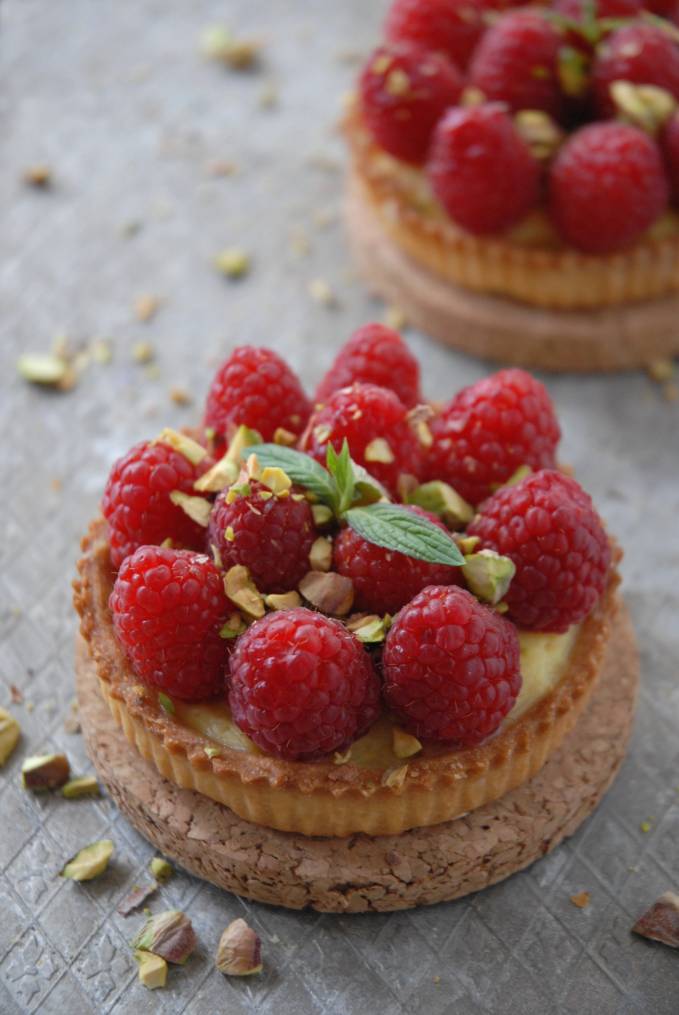 Right then. So not only are these tartelettes made out of an irresistible and simple pâte sucrée, they also have a layer of white chocolate! I filled them up with fresh and creamy vanilla pastry cream and arranged some raspberries on top. Plus, I sprinkled some roughly chopped pistachios on top for a crunch and poured some honey over some of them. Scrumptious and “seasonal”.